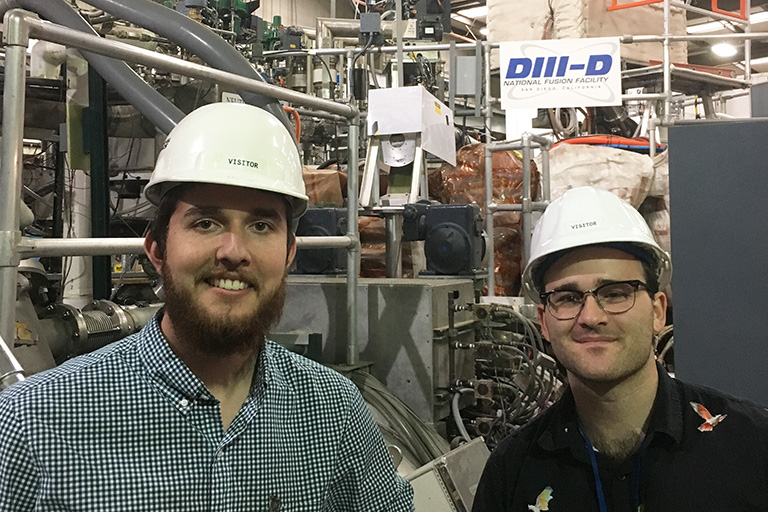 “DIII-D is the largest magnetically confined fusion experiment in United States,” Donovan said. “It is a great opportunity for our students to not only see how so many scientists come together to contribute to the research, but also to present their own ideas to the community and get a chance to plan their own experiments.” They presented potential research avenues that would benefit the fusion community and result in research for the students’ PhD theses, gave presentations to the Advanced Materials Validation (AMV) group, and fostered collaboration with the facility for experimental time on the fusion device.

The proposed studies include impurity tracking experiments in which they aim to better understand the transport and negative effects of impurities in a plasma.

“Impurities can ruin the performance of the plasma, ultimately making it impossible to make a real fusion reactor,” said Zamperini, “We need to know how they move around so as to keep them out of the plasma.”

“Being at DIII-D was a highlight experience where we were able to network with some of the leading experts in the field of fusion energy science,” said Duran. “On top of that, seeing one of the most significant fusion experiments in the world is another fond memory for which I am very grateful.”

Zamperini said the diagnostic method they’d chosen, called collector probes, are part of the DIII-D five year plan, which will help keep UT in future campaigns by the facility.