While studying nuclear engineering at UT for his master’s degree, Tucker McClanahan discovered the direction of his PhD and future career during a fishing trip with a friend and his friend’s brother.

Research Assistant Professor John Auxier II, who would eventually become McClanahan’s doctoral advisor had a fateful question. Auxier, who is now a radiochemistry scientist at Los Alamos National Lab (LANL), discussed McClanahan’s research at Oak Ridge National Laboratory and about his work on the sample activation calculator, which calculates a sample’s response to exposure to the Spallation Neutron Source (SNS) beam.

“If I have a sample of material, could you calculate what I should measure in that sample,” Auxier asked.

As an undergrad, McClanahan grew interested in particle transport theory and took all of Professor Ronald Pevey’s classes on Monte Carlo transport, discreet ordinance, and general radiation shielding classes. He also landed internships at ORNL working on the SNS.

McClanahan was getting ready to head to graduate school, but then snagged a sponsorship offer from ORNL to pursue his master’s degree to continue his research at the SNS. McClanahan stayed at UT and went to work on projects at ORNL including improving a sample activation tool at ORNL where he learned about the transmutation of different nuclides from a sample being put into a neutron beam at the SNS.

Now Auxier works full time under Group Leader Tim Goorley, who is a weapons effects and particle transport expert at LANL. Auxier’s work is in the realm of nuclear security applications, and McClanahan’s part was to simulate the neutron output from a theoretical weapon detonated over an urban environment and try to make sample isotopic composition predictions starting with an initial nuclide inventory in the urban environment and transmuting the nuclei with the theoretical weapon neutron energy spectrum. Up to that point in time, Auxier synthesized urban surrogate samples representative of proposed urban nuclear fallout. In the lab, he would do all kinds of elemental composition measurements to see what elements remain in that sample after production, helping determine what kind of weapon detonated and from what height.

However, no one had done the reverse, to take transported neutrons from a theoretical weapon into the environment and try to predict what he should measure. This became the impetus for McClanahan’s doctorate: to predict what he was going to measure in those samples by transporting neutrons in the urban environment to transmute or activate those isotopes.

To conduct this work, McClanahan worked at LANL over the summers. During his second summer there, he got the opportunity to meet Goorley whom McClanahan knew was one of the leading MCNPâ and urban environment modeling experts. Up to this point, a majority of the urban environment modeling was done using a type of MCNP geometry called constructive solid geometry (CSG), which McClanahan describes as being like Legos in a simulated environment that can be used to build models to study particle transport.

McClanahan wanted to work in a different modeling system called unstructured mesh. This piqued Goorley’s interest because it is the wave of the future to do Monte Carlo transport doing geometry not in CSG, but in unstructured mesh.

In pursuing this possibility, McClanahan serendipitously stumbled on a new streamlined process for generating an urban environment in CAD and then making an unstructured mesh representation of that CAD city.

“
This allows for particle transport on that unstructured mesh and comes up with really cool pictures for the visualization of the result.”

Although unintended, it was a major discovery.

They had modeled cities before, but only using lattice geometries in CSG. Goorley’s team had also modeled a very small portion of New York City and all of Albuquerque, New Mexico, with unstructured mesh but it took a month. McClanahan created a streamlined process where one person could model an entire city in a day. 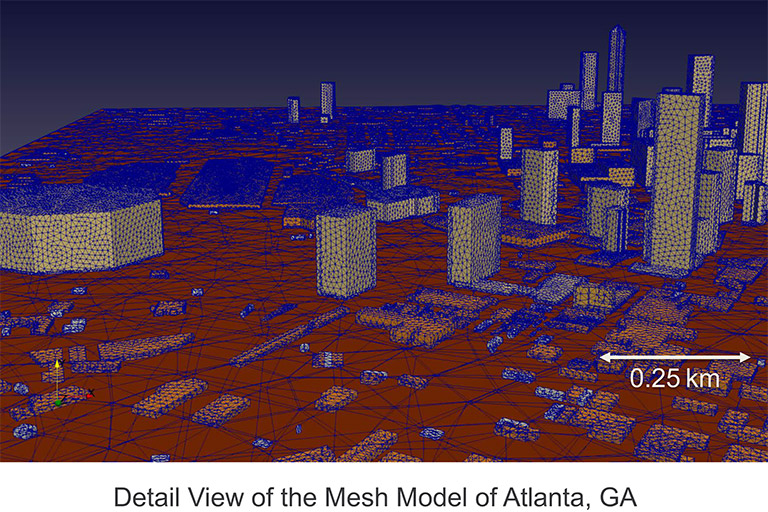 Now with scripts in hand, McClanahan still uses them every day on the job and is pushing the bounds of his codes to the extreme. Historically, there were things that could only be done with CSG code, but with his new scripts, researchers have the option to do them in unstructured mesh.

“We’re modeling all kinds of things in unstructured mesh,” he said. “We’re looking at using my code for activation analysis of an underground facility that LANL is building in Nevada.”

McClanahan’s discovery was timely, as the entire field is moving toward unstructured mesh-based geometry. It has proven to provide an easier interface with all the mechanical engineers and designers of a facility, and there are boundless opportunities for it to support research.